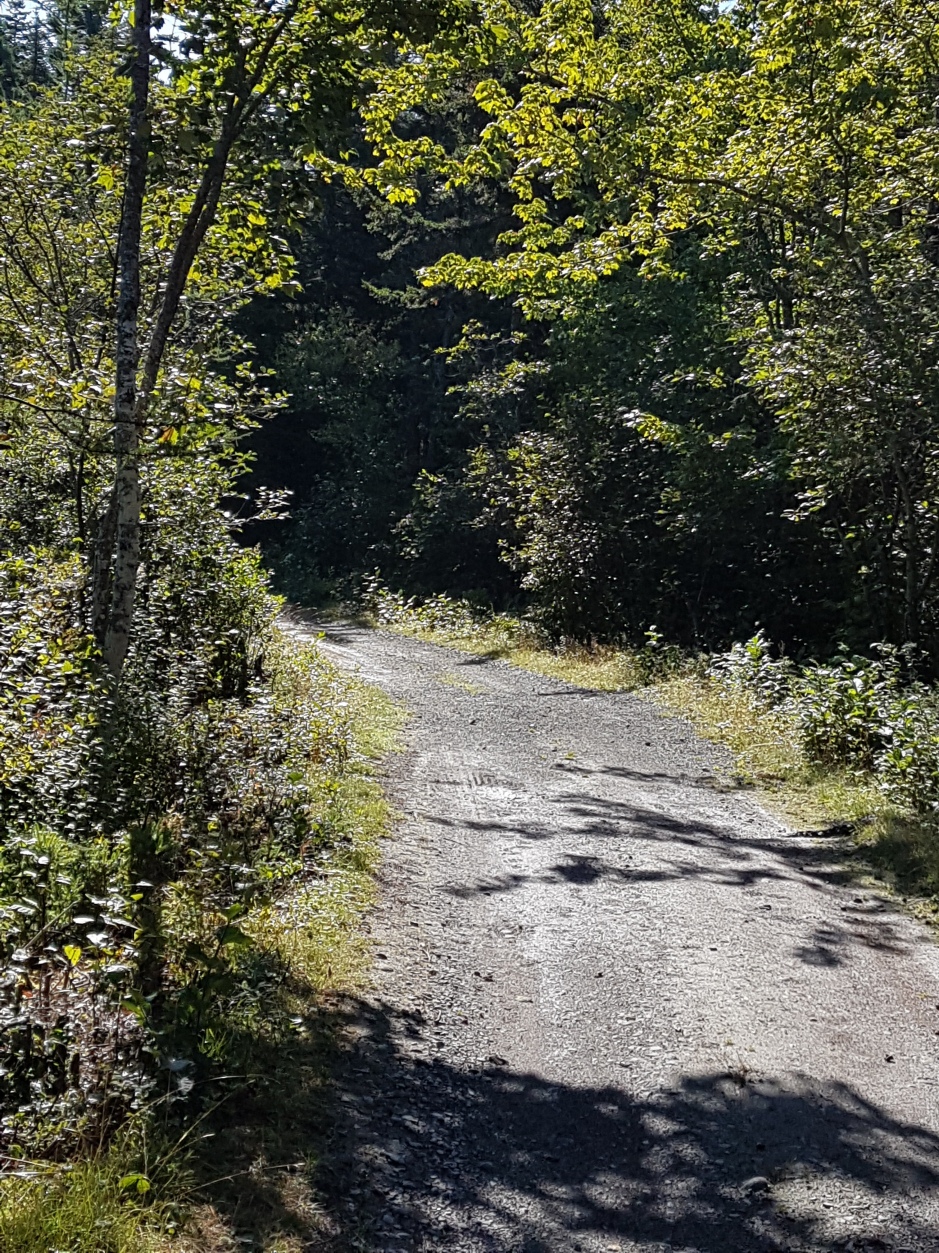 I’d gotten enough done that I felt Jamie could win the argument and we’d go for a walk. Also it was a glorious day after 48 hours of wind and rain.

She’s doing remarkably well for an old dog whose back end tends to head off in different directions. Usually I pick her up when she starts limping, but she lasted an hour on her own 4 paws this time. 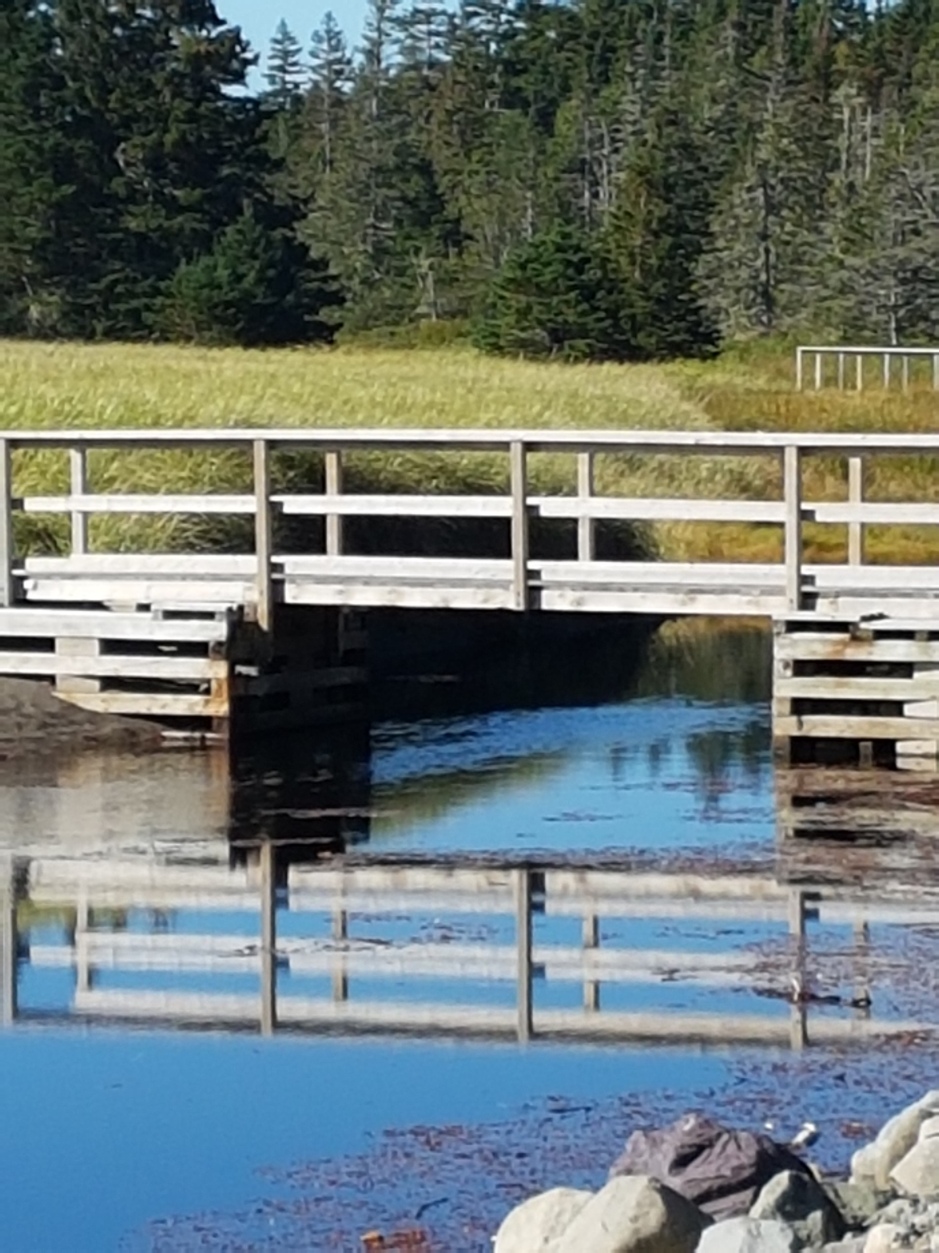 I received a text from Alex teasing me that I’d probably acquired the local accent by now. It’s possible, I’m an unconscious mimic, but it wouldn’t be a bad thing if I did. The voices here are very soothing.

Well most of them are. We disturbed a convention of tiny chipmunk-like beasts and they make noise way out of proportion to their size. They also have a vocabulary that would make the proverbial sailor blush. 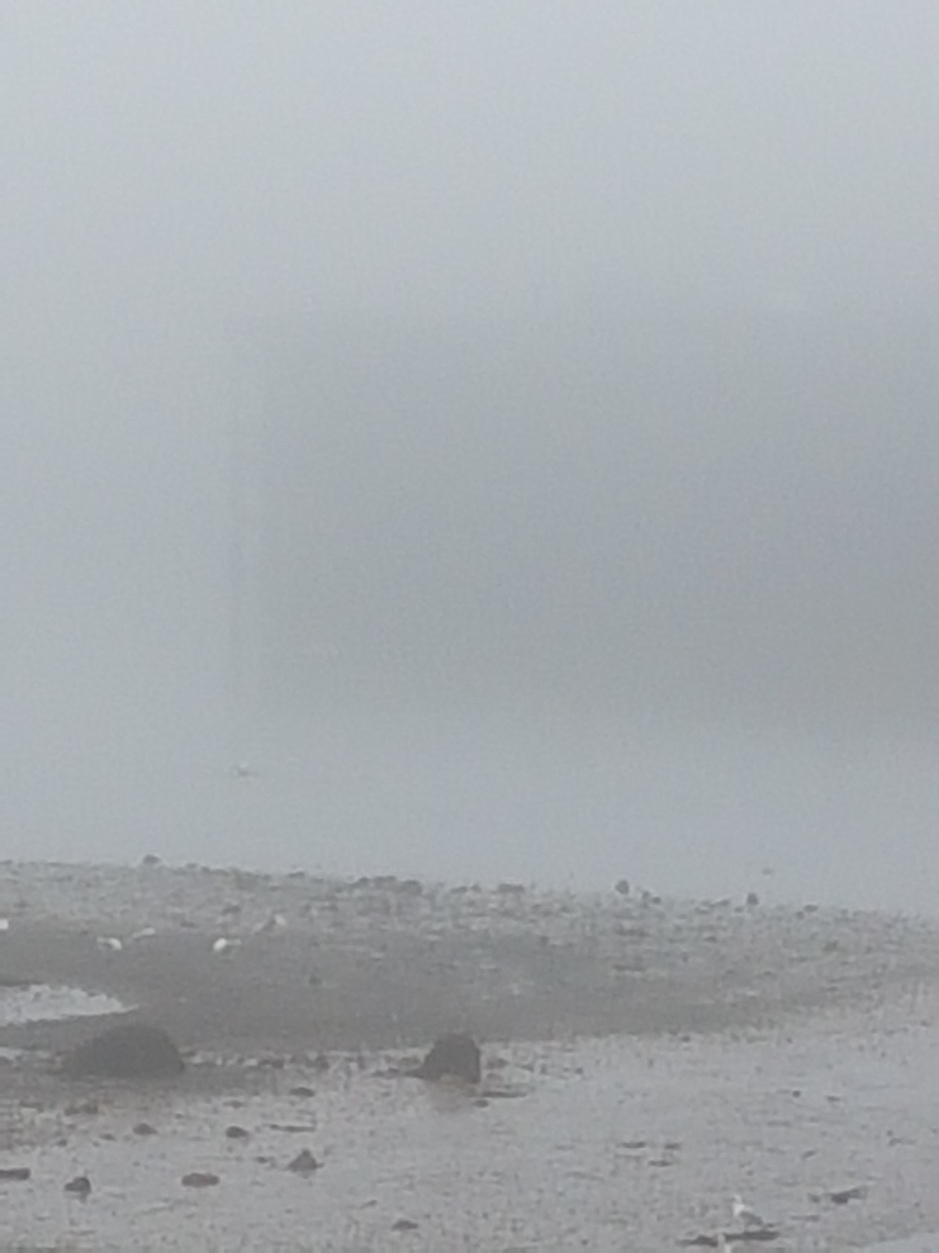 This morning the fog has returned – you might be able to make out the dark hulk that is the old repair facility across the cove.

In the foreground are a few of the local seagulls enjoying low tide.

The foghorns are in full voice, both here and from the US side of the Bay. None of them, of course, have the basso profundo superiority of the pre-electronic lighthouses I listened to as a child. I loved falling asleep to that sound. I’m trying to convince myself that the current soprano tones have their own charm. 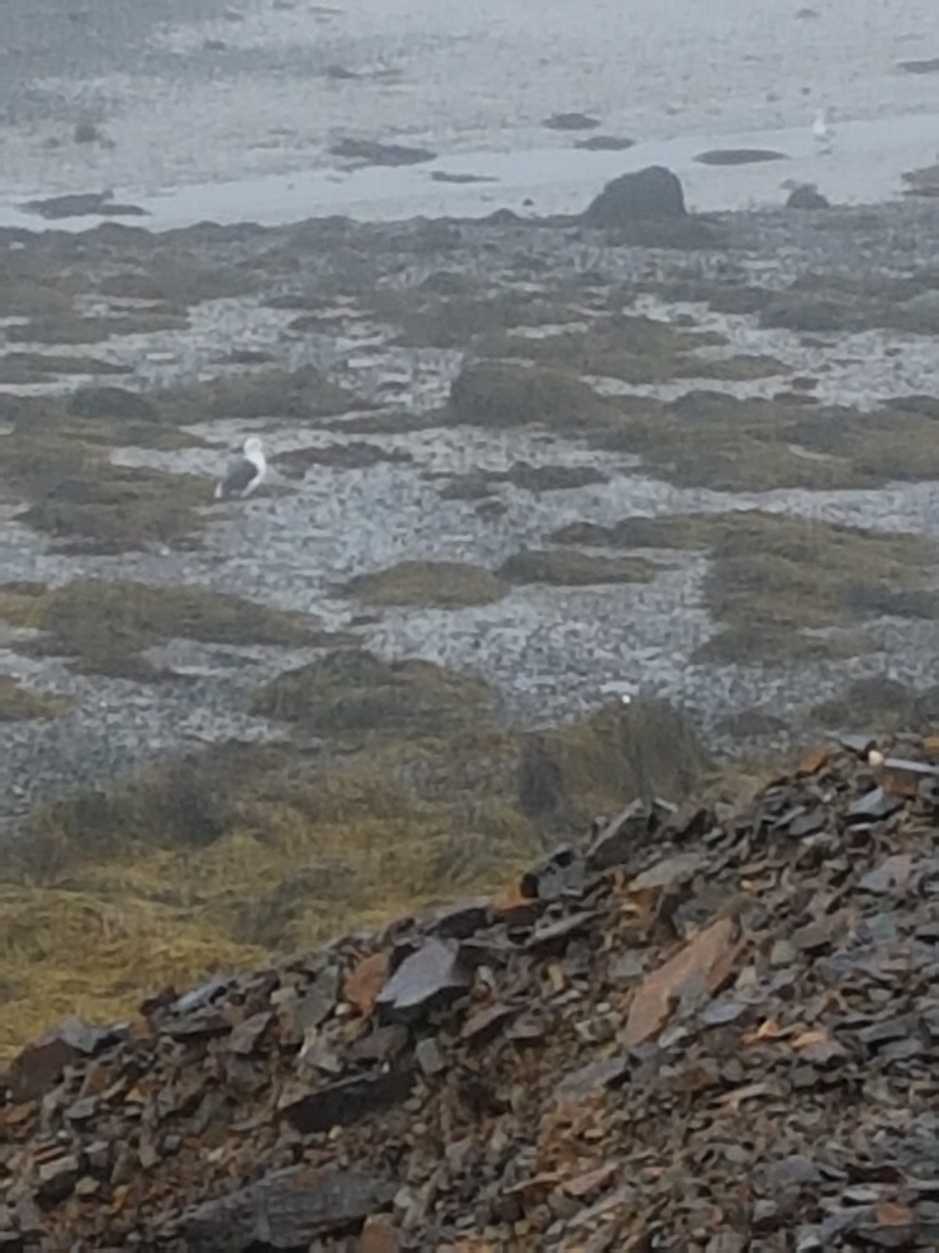 The last voice I’ll mention today belongs to the fellow in the above photo. Well him and his cousins.

Most of the seagulls here are much like the ones I know from the West Coast. Then there are the ones with the really dark, charcoal grey feathers.

Some of you wake up to the delightful sounds of song birds. I get the very loud philosophical opinions of groups of these avian creatures who must have started smoking & drinking right out of the shell. They don’t know a note above a bottom C and don’t care.

They sound like seals with a cough using a megaphone. 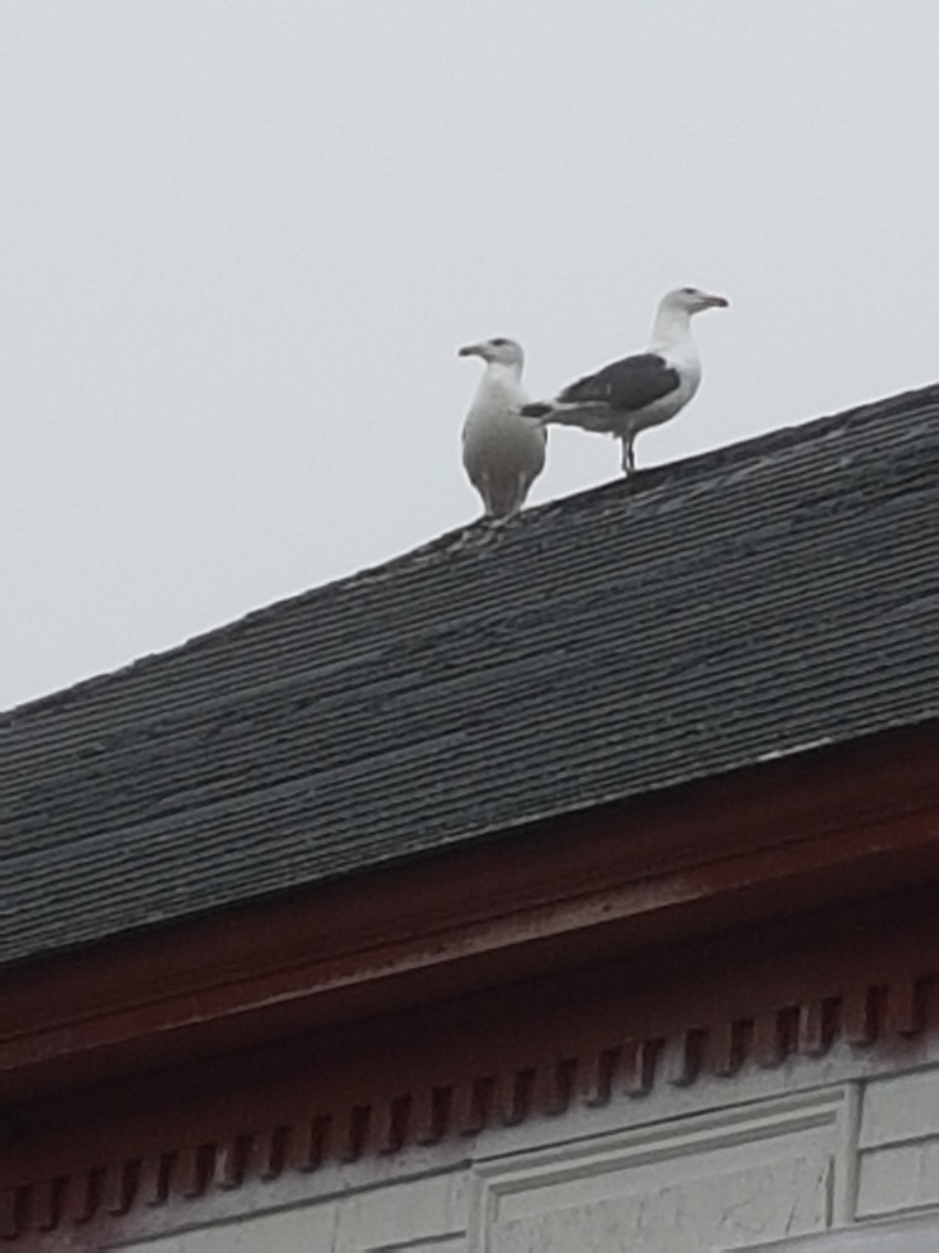