I was woken (well the cats and I were woken) at 4:51 when a man’s voice loudly announced that a frost advisory had been issued for our location. The cats took off and I vowed to find the clock so I don’t need the phone next to my bed.

When I finally did get up, and checked, there was frost on the roof. Jamie and I found the ground frost up a short hill behind the house. So fall really is here. 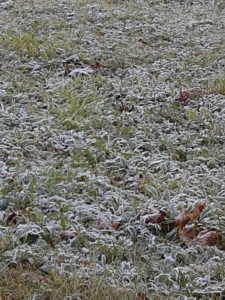 There’s a strong feeling of anticipation on the island right now. It’s been building for weeks and I don’t expect any change until November. That’s when the lobster fishing season starts.

There aren’t many men here who won’t be actively involved. As for the women, well this is a “traditional” community in many respects. I will see a female plumber here before I see a female fisher. I won’t give you odds on the plumber.

Meanwhile every empty piece of ground or dock is getting covered in row after row of lobster traps.

Don’t get me wrong, the women aren’t idle. There’s a lot of money to be made from the fishery and the entrepreneurial spirit is alive here.

Two women I know have opened a roadside food oulet in a small trailer. It’s ideally situated on the road to the main harbour and they plan to serve the fishermen breakfast from 2 to 6 every morning.

I’m hoping to get up early a few times to get shots of the boats heading out. That’s the plan anyway. 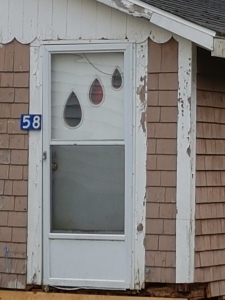 I found another one of those rain drop doors on our walk this morning. I haven’t, however, found anybody who knows anything about them. It’s a mystery I’d dearly love to solve. The person who created these doors was obviously an artist and I think they deserve recognition.

I’m still unpacking and still have the major plumbing and wood stove projects underway. I know they’ll get done soon because my “guys” will be going lobster fishing. The season automatically creates a hard deadline.

At some point I’ll think about the outside of the house. It’ll be a while, but I’m starting a list. This morning I discovered that some people have finished their lists and now they’re just making stuff up.