The good news is that I now have internet in the house. The bad news, from a blogging perspective, is that I realized how much I have to do to fine tune the look of this thing and get the images under a manageable size. Ah well. I’ll work on it.

Last week really was a week of Bell – Canada’s largest communications company. It took a long time to get the internet sorted out because we discovered I didn’t actually have a landline. Remember, I’m reduced to a phone linked modem which is really only inches away from dial-up.

Whoever had set up my account had reprogrammed the wrong number. I’m getting a refund.

Two days later I did some meditation, drank some calming tea, and assembled my TV. Then I unboxed one of the satellite receivers I had purchased and tried to install it.

I wound up spending 7 hours on the phone to Bell Aliant (from whom I had purchased my phone/internet/tv bundle) and Bell Satellite TV (a separate company from which I have to get my tv signal) because I’m on this island and they don’t have cables connecting us to the mainland.

I won’t give you a blow by blow, just the highlights: 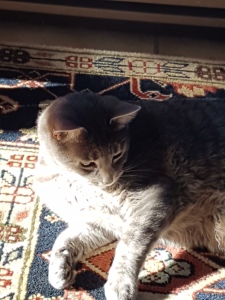 I have learned a few other things this week:

Having said all this – it’s Thanksgiving and I can’t possibly express how thankful I am to be where I am. The Universe has given me a gift I truly appreciate.