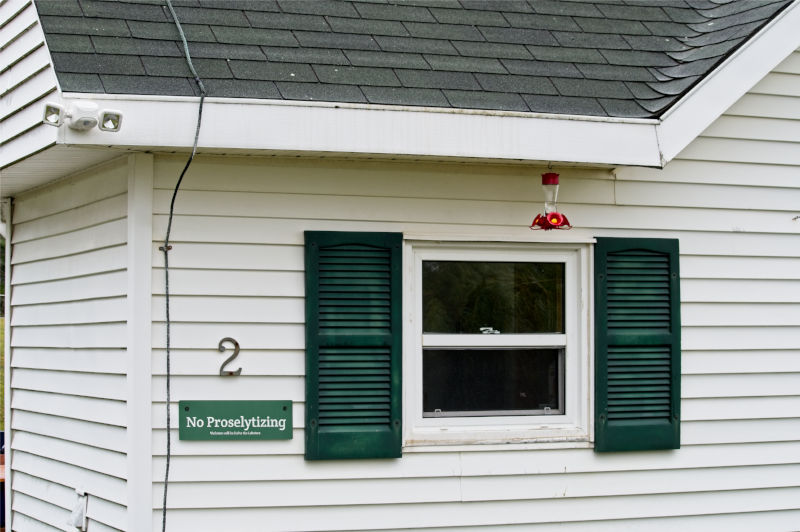 I got a few things done before the first World Cup game yesterday, including the installation of my sign. If you’re wondering, I used my level on it – the house wrap is a little crooked.

I tried using the stream from UK networks but it just kept buffering, so I signed on to TSN Direct. Great signal and, even with that cost added to CBC Newsworld, Acorn, and Netflix, I’m still paying less than a third of what Bell charged for a service I couldn’t use on my television.

Most of the day was rain and fog so thick you couldn’t see anything outside of the cove. It lifted just enough, for a short period, to reveal the large ship in the next image.

I haven’t written much about the difference in accents from west to east. It doesn’t cause a lot of difficulty usually. I say usually because there are times Stanley (for example) will say a phrase and it takes us 5 minutes to come to an agreement on what those words are.

I have finally figured out that context will tell me if “heron” is the bird or the large school of fish being chased by gulls and seals.

I’m not sure if everything is a result of communication glitches though. Sometimes they just don’t think to warn me about something that is taken for granted.

Like the Turtle Crossing signs which appeared yesterday on the major route around the Island. No joke – turtles come out of the brush at this time of year, heading for a specific pond, to lay their eggs next to the road. I was a little surprised at both the signs and the 18 inch reptile staring at me. It makes me wonder what else they haven’t mentioned. 🙂

Now Dear Reader, the rain has stopped so I’m going to go spray mosquito repellent before the next game starts.

I’ll leave you with some of the lupins blooming all over the place.