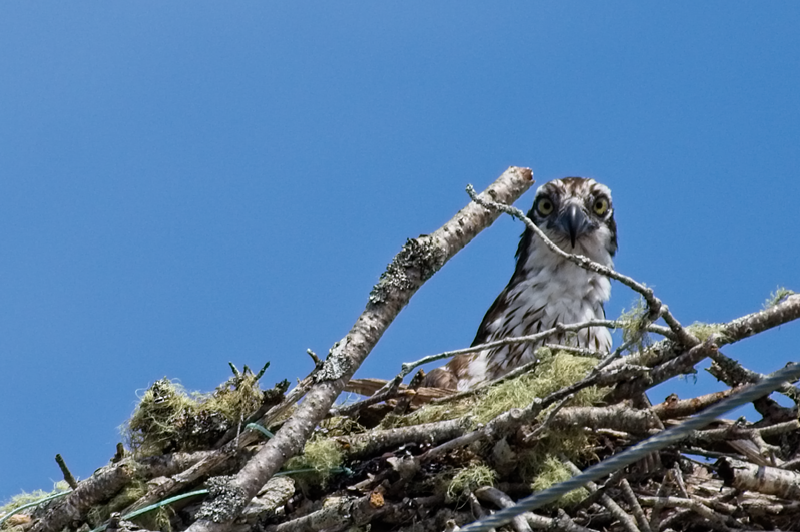 I went to the old Fish Plant to take a couple of Harbour shots to decorate this post – having totally forgotten about that big nest I showed you a while back.

The photos may look like duplicates, but in the first two she’s just trying to figure out what the hell I’m doing there.

Then she gets really vocal. When she launched from the nest and started her turn back in my direction I got in the car and left.

I was only there for a couple of minutes, but I think she likes me.

The real topic today is technology. To be more specific, the internet and my television.

I know I’ve whined frequently about having a maximum of 7 mps download speed here on the Island. I’ve also mentioned using WiFi to receive sports/news/entertainment on my Smart TV.

While the TSN GO app is really useful for the World Cup it isn’t always satisfactory. I can tell it’s buffering a lot because the picture blurs.

I did a speedtest on my television (now there’s a phrase I never thought I would use) and was getting speeds between 1.7 and 2.1 mps. sigh

I started researching solutions and the first one I tried was a WiFi repeater. The logic is that you install it somewhere in the house between the modem and the TV and it boosts the signal (doesn’t speed the original up just helps more of it arrive).

I should know better at my age, still I bought something “very easy to install”. Honestly the instructions would have been equally coherent if I’d held them upside down.

Not only could I not get it to work – I broke the internet. The cats learned some new words.

Yesterday I received my second possible solution. A powerline ethernet adaptor. You plug one unit into the wall next to your modem and then attach to the modem with an ethernet cable.

You plug the second unit next to the TV and attach that with another cable, then you tell the TV it’s connecting “wired” not “wireless”. The revised speedtest scored 7.9 mps. !!!!!

The real test was Twitch (I like to watch a couple of the DnD channels). I haven’t been able to watch it at all. Now there is no buffering and a great picture.

It’s so nice when something actually works.

Update: Saffia’s research has led me to the Osprey also known as a Fish Hawk. She’s very pretty. (well, they both are) 🙂