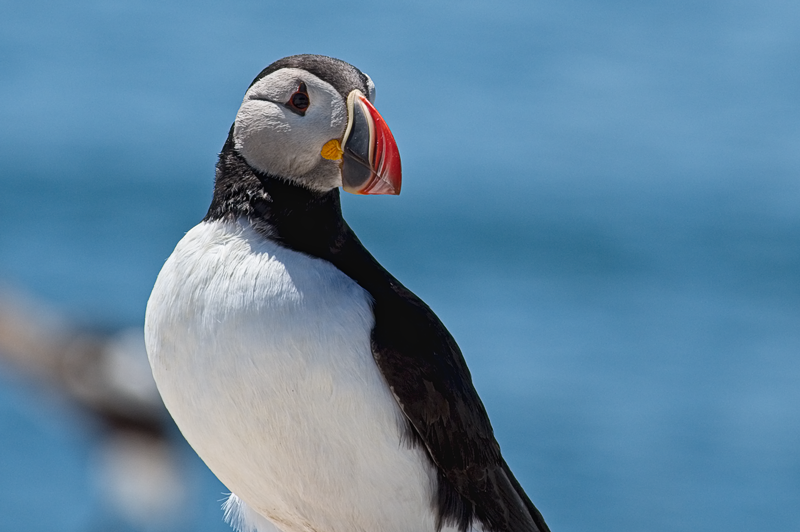 Two of the names given to a group of Puffins are An Improbability and a Circus. They’re both.

My Bold Coast Charter boat to Machias Seal Island left 5 hours later than originally scheduled because of the impact of Hurricane Chris on the tides. I was just relieved we could go.

The boat on Thursday had to stay offshore of the Island because of rough seas – so we were very lucky. The ocean was relatively calm and the sun shone. I discovered that SPF30 really isn’t strong enough out on the water. 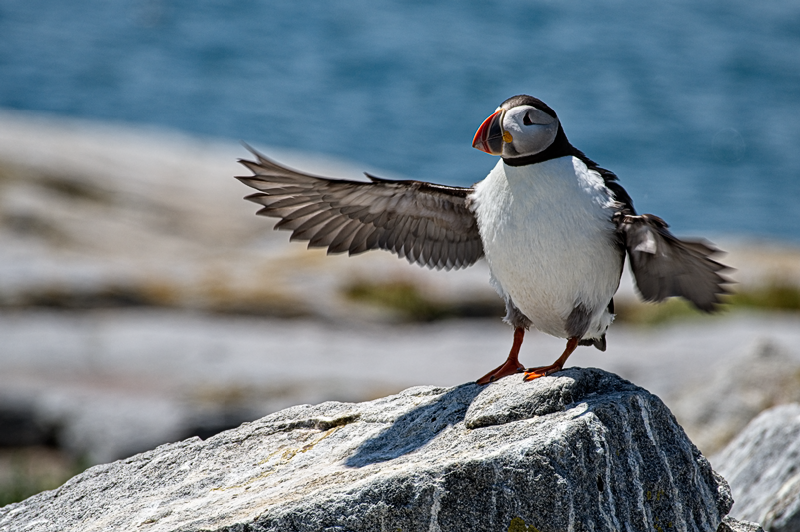 The birds are smaller than I expected. Somebody had told me they were the size of chickens – they’re more like a pound in weight and stand approximately 10 inches tall.

They shouldn’t be able to get off the ground – this is not a graceful bird. Imagine one of those windup bath toys that shoots across the water in a straight line. That’s how they fly.

The noise they make can best be described as “chainsaw”.

They only have those bright bands during breeding season. For the rest of the year they stay out at sea and have a dull orange beak.

It is, apparently, possible to get a good idea of their age by the bands. What you can’t do is tell the difference between males and females.

The group of people on my charter were wonderful and they are all (I think) birders. My hesitation to bring one of my camera cases was totally misplaced. There was an enviable amount of equipment and I’m going to be dreaming about the lenses I saw.

One of the things I learned from them was to look for the birds with fish in their mouths. I’ll try to do better next time.

I was exhausted last night, but I downloaded over 5,000 images to the computer. There are some good shots of not only Puffins but also Razorbills, Murres, Arctic Terns, and Common Terns. The latter are the smallest but have a really bad temper.

I’ll have more on them and the Puffins in future posts. Eventually they’ll each get a separate album on Flickr.

As a quick summary, before I go back and try to get a handle on all those photos, I had a wonderful time. Puffins are ridiculous. They’re adorable. I love them.