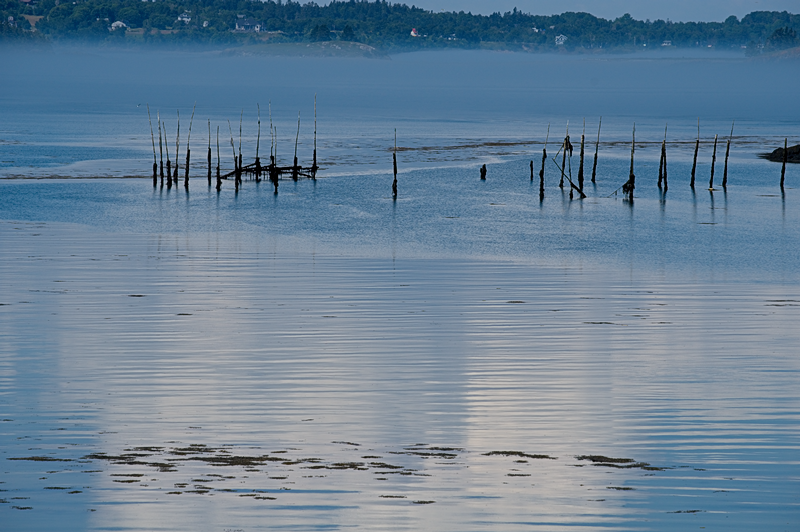 There was a lot of low fog on Tuesday when we began the project (apparently) designed to make the cats miserable.

The first surprise was the arrival of a dump trailer. I had been trying to prepare myself for giant piles of trash building on the lawn, but that’s no longer necessary. Truth be told, there is a pile growing next to it because it’s already full. More on that later.

The first delivery of supplies arrived that afternoon. Today I’ll have two trucks – one with the forklift which will place shingles etc., on the roof. We started by gutting the sun porch. In a very informal cottage this is the most, um, relaxed of the rooms.

You can see the stains on the ceiling from leaks caused by ice dams – the one on the left is the newest. It appeared after the recent high winds/heavy rains and the resulting fall of water fried my tv remote.

The acoustic tiles remind me of elementary school, so the ceiling here (and in the living room) will be replaced with pine planks.

The second surprise was the discovery of some insulation in the walls and above the ceiling. This was very puzzling because the air flow test results indicated that there was nothing there.

It took us a while to sort it out, but what you can’t see is that there are huge voids in the walls where, I guess, they didn’t feel any protection was necessary. The R value of what is there was originally 8 – that has degraded over time, so even if the coverage was complete it would be inadequate for these winters.

Based on what we found in the ceiling – we’re fixing the roof first. We’ll then add R42 worth of bats on top of the small amount already there. The trip yesterday was for the roofing supplies (including an ice pad) and some 2x2s. We’re going to build out the wall studs and put in the new insulation on top of the old.

I got one more nice surprise yesterday. My young friend (pictured here when we were gutting the room) took advantage of our absence to remove that 20 foot hydrangea you can see through the window on his right. My view is now doubled. I had asked him to do this – I just didn’t expect it to happen so quickly.

He also gutted the living room (where there really is no insulation). The dumpster is now full and the cats hate me. I’m happy though. 🙂

Join 98 other followers
Follow This Fundy Migrant's Tale on WordPress.com