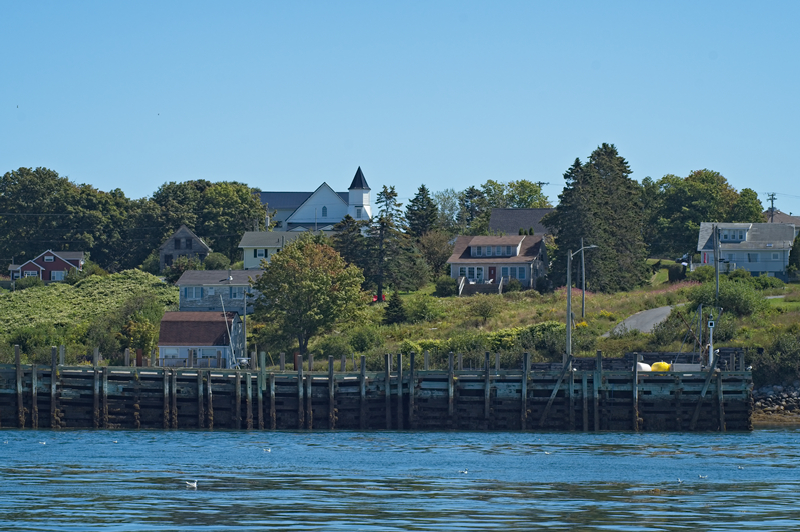 I went out on the boat with a friend the other day to make a trip from North Road to Head Harbour and back. These shots show you the great metropolis near me, some of the birds, the Lighthouse, and the Harbour from the water.

It’s been an “interesting” week. I might have run into a tree with the riding mower. Both the tree and the mower came out unscathed. My glasses, however, not so much. If you see me wandering around in my sunglasses you know why. Oh yeah, and my new phone broke the day before its case arrives.

Two trips up river and more time on the boat followed that trip down the west side of the Island. I was going to blog the other day but wound up operating the power block again. Then yesterday I spent 15 hours onboard, in the pouring rain, watching up close as a crew took out fish.

It was fascinating, and they are a great bunch of guys, I was cold and wet and hungry by the time I got home. I just wanted a hot shower, some food, and my bed. .  That was my plan.

I always have a plan. Sometimes I have to change it, but there is always a plan. One of the clearest, most detailed of my plans is to get a big dog. To be more specific, a puppy which will grow into a big dog. I’ve held off because puppies explore with their mouths and this place is full of plaster, screws, etc.

I know the breed I want, I’ve researched places in the Maritimes to find the perfect one and even thought of names.

As we drove into my driveway last night my companion got a phone call. A short one. He hung up, pulled back into the road and headed into Wilsons Beach. We arrived in his sister’s yard and he told me to get out.

I didn’t want to get out. I wanted a hot shower. As it turned out I didn’t actually have to move – she came outside. Then something landed in my lap.

Yes it was a puppy. I know this puppy’s parents – this is not a young version of a big dog. Not only does he have small parents – he’s the runt of the litter. sigh

She said “I’ll take him back if you don’t want him”. I told her she’d have to pry him from my cold dead hands.

The cats think their new brother is a large mouse. He won’t let me be more than 6 inches away and all 2.5 lbs of him slept on my chin. Now I’m into the alternate reality type of tired and still haven’t had a shower. I’ll make a new plan.