This is the bridge connecting our Island to the State of Maine. There’s rarely any traffic these days (not surprisingly). Canada Customs issued a clarification on the crossing rules for Americans specifically here, at Point Roberts, Washington and Hyder, Alaska.

I haven’t found anything from the American authorities but:

“Premier Blaine Higgs said, despite the U.S. border being closed, Campobello residents shouldn’t have a problem getting to mainland New Brunswick.“We’ve been told by the authorities that residents of Campobello will be allowed to move equally,” said Higgs (and) ambulances would be able to transport residents across the border without a problem.”

The word “should” gives us great comfort. 🙂 I’m not going anywhere. My Amazon order is large this month and I’ll miss talking to my Postie. I’ll just wave at her through the window.

Consider this shot of vehicles on the wharf a “before” picture. Residents are staying inside for the most part. When people come together on the roads for conversation they now seem to limit it to two vehicles and they park 10 feet apart.

There are only a few families left to return from vacation. Even those who proclaimed the virus a hoax for weeks are now muttering dire warnings to travelers that they’d better quarantine themselves.

I’m amused and horrified by the occasional talking head on television demanding to know when this is going to end. Seriously? I don’t think they’ve quite grasped the situation.

We’ll get through this. If it was warmer I’d get more spring cleaning done, in the meantime I’ll just try and keep Fish from destroying anything else around here. I keep telling him that what he eats has to come out the other end. He’s like those talking heads and figures everything should arrange itself to his satisfaction. The rest of us know better. 🙂 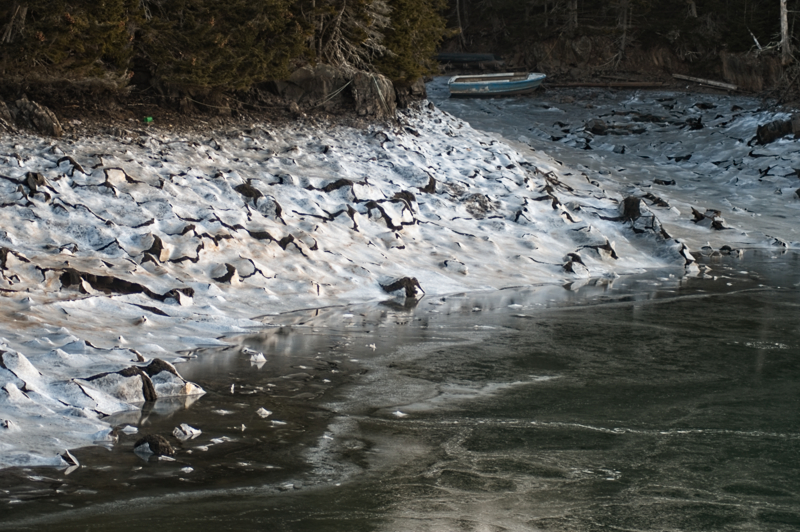